Reacting to a September 22 satellite observation from the US National Snow and Ice Data Centre (NSIDC) showing that that Arctic sea ice reached the tenth lowest on record, Dr Sian Prior, lead advisor to the Clean Arctic Alliance, said:

“There is no time for complacency. With a reported lull in international transit traffic passing through the Arctic’s Northern Sea Route this season, Arctic and other governments must seize the opportunity to massively crank up climate action on shipping. By implementing green shipping corridors throughout the Arctic, ships moving through these waters could considerably lower their impact on both sea ice and Arctic ecosystems, and on the global climate.” 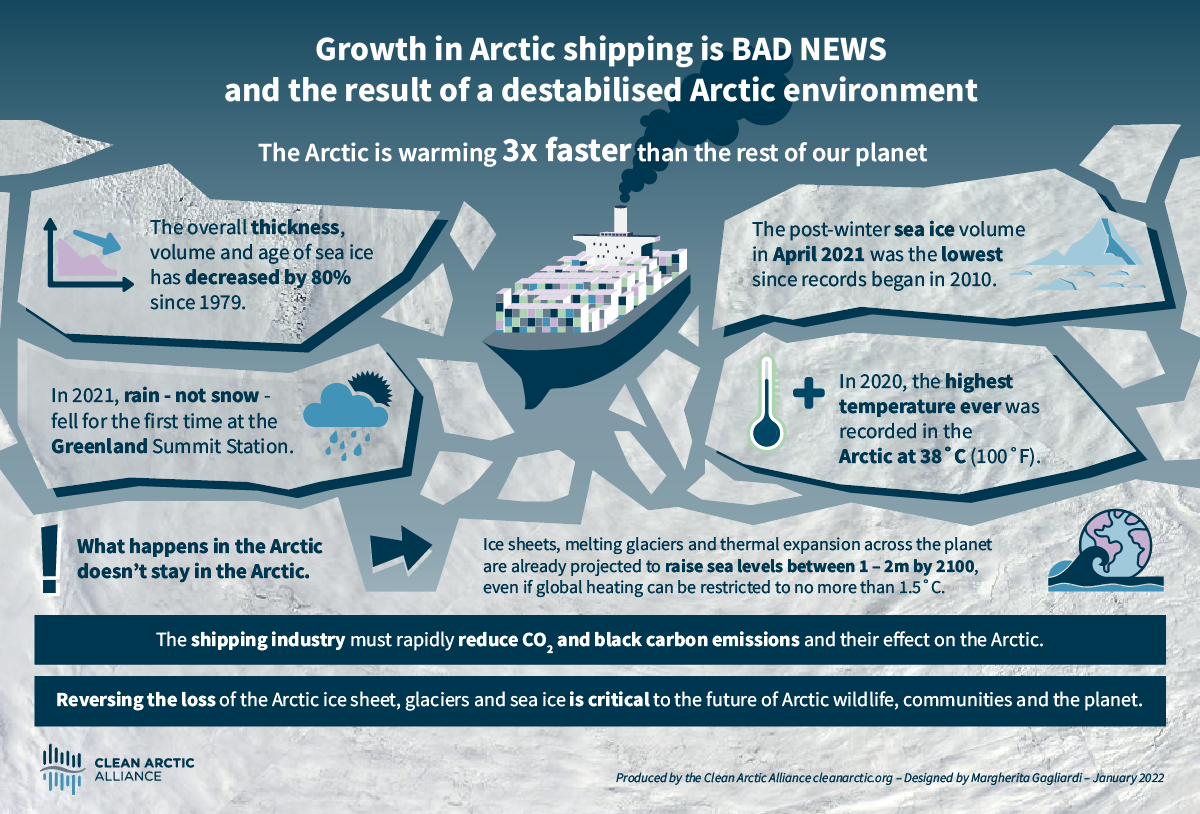 According to the NSIDC, 2022 is set to be the tenth lowest Arctic summer sea ice extent since the satellite record began just over 40 years ago, tying with 2017 and 2018 at 4.67 million sq km. The summer sea ice minimum for the last ten years and the lowest ever summer sea ice minimum of 2012 all fall significantly below the 1981 – 2010 average. The August sea ice extent was 1.21 million sq km below the 1981-2010 average minimum. The NSDIC emphasised that “Changing winds or late-season melt could still reduce the Arctic ice extent, as happened in 2005 and 2010”.

“The current climate crisis and the IPCC’s call for a halving of global greenhouse gas emissions by 2030 to stop heating above 1.5 degrees makes it crystal clear that we must double-down on efforts to reduce black carbon and greenhouse gas emissions from shipping, in particular from shipping operating in and near to Arctic snow and ice”, said Prior.

“In May 2022, Nordic Ministers committed to green shipping corridors for emission-free shipping, which would serve to give Nordic waters the protection they need. In August 2022, the Clean Arctic Alliance called on these Ministers to put in place the necessary measures to reduce black carbon emissions, to reduce GHG emissions and to prevent the discharge of scrubber wastewater into the oceans in the Nordic regions of the Arctic, i.e. on routes between Greenland, Iceland, Norway and other regions.”

When black carbon, a short-lived climate-forcer responsible for around 20% of shipping’s climate impact (on a 20 year basis), is emitted from the exhausts of ships and settles onto snow and ice, it accelerates melting and the loss of reflectivity – the albedo effect – which creates a feedback loop that further exacerbates local and global heating. Learn more about black carbon here.

The August 10 letter to Nordic Ministers from the Clean Arctic Alliance lays out the necessary protection measures, including:
• switch ships to use distillate fuel to reduce black carbon emissions
• expedited action to cut ship greenhouse gasHG emissions before 2030
• ban the use and carriage of heavy fuel oils ahead of the entry into effect of the IMO’s Arctic HFO ban in 2024,
• prohibit the use of scrubbers and associated discharges,
• develop shore power for use in ports.
While we have detailed these actions to Nordic ministers with regard to regional green shipping corridors between Nordic, the current climate crisis, and the lull in Northern Sea Route Traffic creates an opportunity for all Arctic countries, as well as other countries with ships operating in the Arctic, to take these actions across the entire Arctic region in order to protect both the Arctic and the global climate”, concluded Prior.

The Arctic is warming on average four times faster than the planet as a whole and, according to the Intergovernmental Panel on Climate Change, is nearing points “beyond which rapid and irreversible change” such as massive loss of sea ice can be expected. There is also very high confidence that under all climate and socio-economic scenarios, low-lying cities and settlements, small islands, Arctic communities, remote Indigenous communities, and deltaic communities will face severe disruption by 2100 – and as early as 2050 in many cases, according to the IPCC.

The Clean Arctic Alliance urges the following urgent shipping action to avert a climate disaster:
• IMO member states must enforce an immediate switch to distillates for ships in or near the Arctic and develop global measures ASAP to tackle the problem of black carbon globally, and agree to enhanced short-term action, including a revision of ambition under the IMO’s Carbon Intensity Indicator (CII), to ensure ship greenhouse emissions are halved by 2030.
• EU members states must support regional action to reduce emissions from ships using EU ports and operating in the Arctic.
Source: Clean Arctic Alliance

2022-09-28
hellenicshippingnews..
Previous: A tale of two cities as Londoners mourn, tourists cheer pound’s slide
Next: China vows positive trade growth in the second half of the year