Ship Finance Expected to Rise Once Again, After Years of Contraction

Greek banks continue the upward trend that started in 2017 and their portfolios are up by 8.03%. Eurobank is leading in terms of rate of growth with an increase of 20.73%. All banks show growth and this year we have added two more banks in the Groups, which are based in Cyprus. Traditionally, we have always included Cypriot Banks in the Greek group. Piraeus is up 3.27%, Alpha by 5.17%, NBG by 1.05%. Greek banks’ share of Greek ship finance has gone up to 18.47% from 16.84% in 2018, 15.25% in 2016 and 14.63% in 2015. This is a resilient performance by Greek banks despite continuing domestic problems and underlines the commitment of Greek banks to shipping.

The Lead Managers are up by 9.21%, turning round last year’s drop of -29.32%. Forward commitments, which by definition show the position of trust in the future of Greek shipping, continue their downward slide down to $2bn from $2.4bn last year and $3.55bn in 2016. Forward commitments to new buildings are down by -18.09% showing that there is less emphasis in newbuilding finance, compared to second hand vessel finance.

In its analysis, Petrofin Bank Research said that “2018 was a year of contrasts. The German ship finance market continued its fall by -18.64% with few banks remaining committed to shipping. Although the pace of decline has been slowing down, there were still surprises to be had, as was the decision by Nord LB to abandon shipping altogether. Interestingly, HSH became Hamburg Commercial Bank owned by private Equity Funds with a reduced loan portfolio but still willing to continue to serve its clients. The notable outperformers last year were Credit Suisse and BNP Paribas, closely followed by HSBC, Citi, ABN Amro and ING in the top 10. Greek banks, on the other hand, against all odds, showed a robust performance, even though they are still handicapped by the Greek economy and a high percentage of nonperforming loans in the non-shipping sectors”.

It added that “the Far East and North American shares continued to rise, failing though, to fully counterbalance the decline of German and UK banks. The main competition to banks lies in Far East leasing. Chinese lessors have strongly developed and have also begun to address the requirements of smaller owners. The number of Chinese leasing companies has grown enormously and in the meantime their offered finance cost has declined now being on par or even lower than banks. The response by banks has been one of primarily dealing with their own proven clientele, thus hardly considering any new clients. Often owners have no choice but to rely on leasing to finance their newbuildings or modern acquisitions”.

“Over the past couple of years, Japanese leasing companies have selectively provided finance to Japan linked clients, favouring those with a long record in dealing with Japanese shipyards and banks. Among owners, the two tier lending market continues to dominate as a lending model. The top owners achieve low cost facilities with flexible terms whilst the smaller owners struggle to secure finance. The presence of private Equity Funds in Greek ship finance has been subdued largely because of their high cost despite offering higher loans than banks. Overall, bank margins have begun to slide as the emphasis is focused on size and quality. On the whole, however, most banks have enjoyed a secure loan portfolio with few nonperforming loans in respect of loans provided in recent years. Banks which have nurtured bad loans for a number of years, have continued to offload them primarily to private Equity Funds. Some private Equity Funds, e.g. Cerberus, developed enormous fleets of managed/controlled vessels on the basis of which they hope to make exciting returns. All banks that recently entered the ship finance market are experiencing solid growth. These include Amsterdam Trade Bank, Bank of Cyprus, Hellenic Bank, M&M and, recently, Astro Bank. It should be noted that many smaller national Far Eastern and Middle Eastern banks are also developing their shipping presence”, Petrofin said.

It added that “the shipping markets in 2018 were not inspiring but did provide some support to banks. The dry bulk and LNG sectors witnessed good performances. As the year developed, there was (and still is) growing concerns on the impact of trade wars and restrictions, the effects of Brexit, the mounting geopolitical tensions, as well as the effects of the Vale dam disaster which has severely curtailed the Brazilian iron ore production and exports. Banks are becoming increasingly worried of the slowdown in international trade growth as a result of the higher tariffs imposed by the US and China and how this could impact international trade in the coming years”.

“A slowdown in newbuilding orders and deliveries has helped counterbalance the declining international trade growth but scrapping is still relatively low levels. The new 2020 fuel regulations, as well as the implementation of the Ballast Water Management system have added to the challenges of the shipping industry and the banks. Banks have also begun to look into the environmental issues related to shipping and their clients. As a result, loan approvals have become longer and uncertainty has grown further. Despite all the above restraining factors, Greek shipping has continued to grow and this underpins the interest of banks in Greek shipping. Over the last years, the Norwegian capital and banking market has developed strongly and has provided some solutions to Greek owners in financing, investment support, leasing/bareboat and joint ventures. Consisting mainly of current and ex shipping parties, Norwegian investors have displayed good timing and shipping experience. This has attracted many Greek owners, e.g. Alafouzos and others”, Petrofin said. 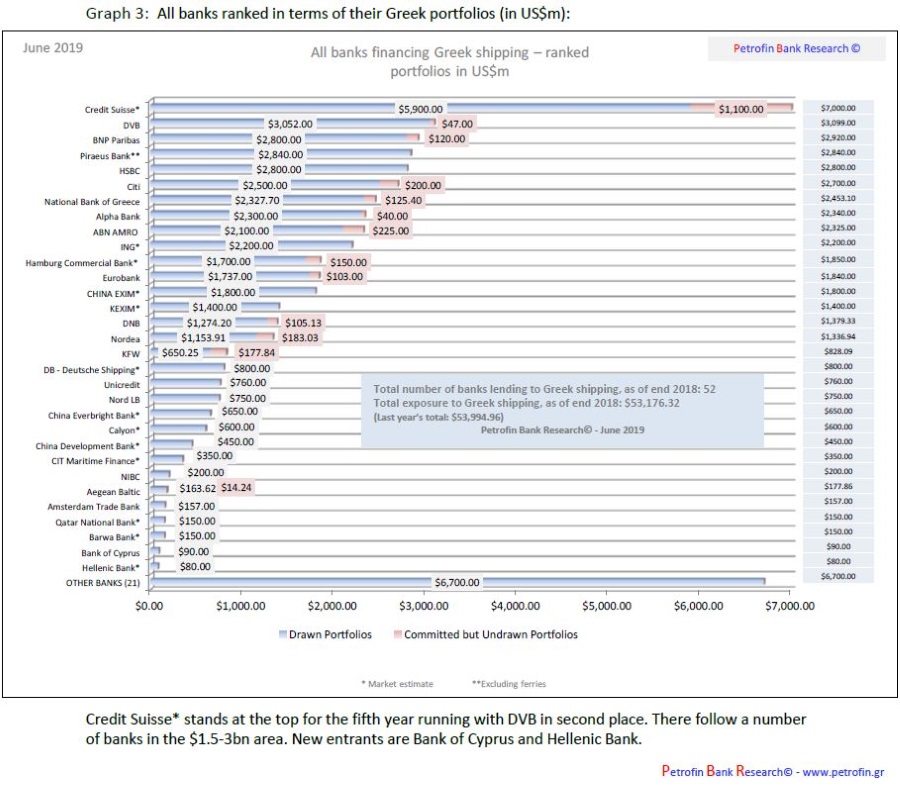 What of the outlook for shipping banks in the next years? “The adjustment process by overleveraged and aggressive banks has come to near its end after 10 years since the 2009 financial crisis, with few banks nowadays nurturing sizeable bad shipping loans. As a consequence, both the survivors of the above contraction and the recent entries are expected to once again drive ship finance higher. The recovery though is expected to be slow, as banks are still constrained by capital restrictions and develop increasingly demanding risk and compliance departments. To a large extent, it is the performance of the various shipping sectors, as well as the overall global economic and geopolitical factors, that will determine the immediate future and commitment of shipping banks. Owners’ appetite for additional newbuildings and second hand purchases will also be dependent on the above factors. However, interest in LNGs and tanker vessels continues unabated, seemingly unaffected by global economic and geopolitical issues”, the report concluded.

Previous: Tanker Shipping: While we wait for 2020 to kick in, it’s all about politics
Next: MMi Daily Iron Ore Index Report June 13 2019