After the initial disruption, last year ended better than expected for global shipping.

The industry will benefit from world trade recovery in 2021, with average seaborne trade volumes expected to end above pre-pandemic levels, yet underlying differences are significant. China is one of the driving forces behind the recovery, so shipping traffic through Asia leads to the uptake in several trades (like iron ore). Soaring freight rates in container shipping are expected to ease over the course of the year. However, with increased volumes meeting delays and stretched supply chains due to congestion, container shortage and reduced air freight capacity, rates will remain high.

Tariffs in the less eye-catching dry and liquid bulk markets – which together make up the largest part of shipping volumes – are not booming. In dry bulk, rates recovered significantly, but spot rates in tanker shipping hit 30-year lows in early 2021. Trades of liquid fuels are suffering due to the pandemic, with road and air traffic still at low levels. Volumes are expected to pick up in 2021 but won’t return to pre-pandemic levels just yet. In terms of volume, cruise shipping is obviously the heaviest impacted shipping niche and is still operating far below normal levels this year.

While the shipping industry generally benefits from the trade recovery, bunker fuel bills surged as oil prices soared, leading to higher operational costs for shippers and/or shipping companies. As fuel spreads between high and low sulphur (compliant) fuels are on the rise, and in 2021, fuel efficiency and the trade-off between fuels will be in the spotlight again.

Over 80% of world trade volume is seaborne.

Due to supply and demand factors, world trade was initially impacted heavily by the pandemic. Ultimately total world trade contraction remains limited to just over 5% in 2020, after recovery in the second half of the year. Oil products suffering from significantly lower consumption from road traffic showed the largest decline, followed by coal due to lower usage for energy generation and phase-out effects.

Despite China’s strong demand, even iron ore showed just moderate growth, even though steel production was in double-digits in both Europe and the US. 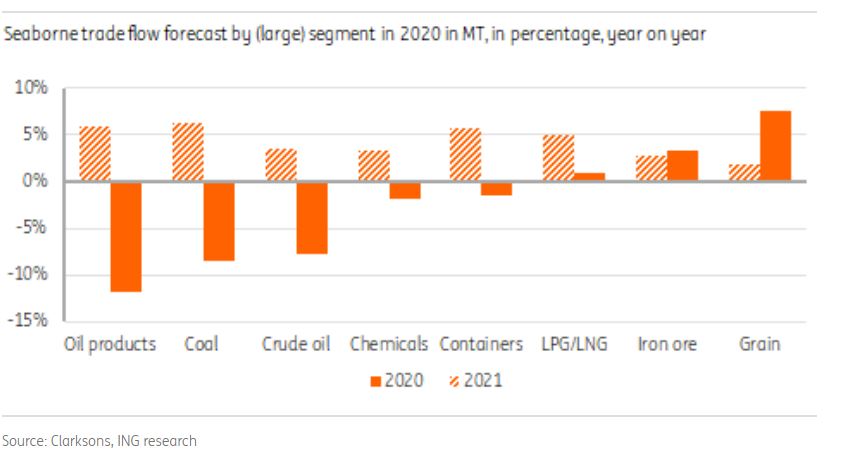 Seaborne trade volumes to show a broad recovery in 2021

In our base-case scenario, we expect volumes to rebound at an annual 6%, however, we see downside risks as we explained here. The resilience of world trade volumes was backed by recoveries in retail sales as consumers shifted consumption from services to goods like electronic devices, home and garden furnishings and outdoor sports article – all of which are goods shipped in containers, and many are ordered online.

On the other hand, a significant recovery of industrial production drove the recovery, especially with swelling flows to and from Asia. 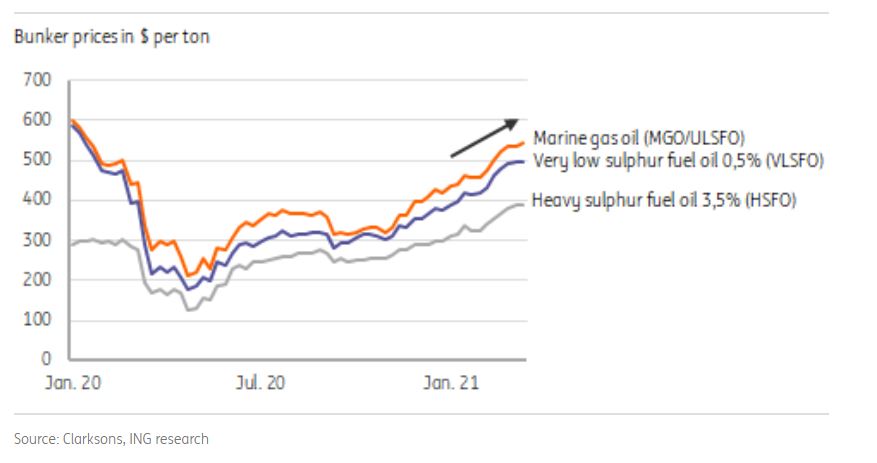 Rising fuel costs will attract attention in 2021 as the fuel bill is often the largest cost component for shipping companies. Shares in total cost run-up to 40-60% for the largest vessels.

After the implementation of IMO 2020-rules at the start of 2020, oil prices fell, concealing the higher price of very low sulphur fuel oil (VLSFO) for the majority of ships without an installed scrubber. But with oil prices now higher than their pre-pandemic levels and further tightening expected, fuel costs will rise significantly.

Bunker costs were already 50% above the 2020 average by the end of February. Given the supply of high sulphur fuel oil (HSFO) is expected to rise, spreads between fuel grades are widening again (currently 20-25%).

The majority of vessels are sailing on compliant fuel. It now depends on contractual agreements whether shipping companies pass the extra fuel costs directly to charterers.

Charterers paying the fuel bill might favour ships equipped with a scrubber and/or will increasingly focus on more fuel-efficient tonnage (younger vessels). Ship operators and charterers might also consider further reducing the speed to save fuel.

Worldwide shipping fleet capacity expanded in 2020 by 4% in terms of deadweight tonnage (DWT)/teu (3% for bulkers, 4% for tankers and 3% for containers). This affects the market balance negatively after a year of contraction. However, new deliveries are expected to slow in 2021 and 2022 as order books for new vessels reach their lowest levels since 2003.

Given the background of energy transition and next-generation vessels, shipping companies tend to act conservatively, which is strikingly different from the time of the global financial crisis when shipyards had three times bigger backlog. Besides the fact that fleets are ageing and for example, average ages of very large crude carriers (VLCC) and Suezmax tankers reached 20-highs, which could push up scrapping in 2021 also given relatively high scrapping prices.

Strong uptake of Chinese net exports resulted in fairly stable annual container throughput in the world’s biggest ports Shanghai and Singapore, and even a small increase in Ningbo and Shenzhen. Figures indicate the positive trend continued at the start of 2021.

The largest European container ports seemed to suffer the most from the pandemic, and the port of Hamburg stands out in this regard. On average, traffic is expected to return to above-average growth in 2021. Consumers might shift some of their consumption back to services once travel restrictions ease and services reopen, but at the same time, savings are also at high levels. 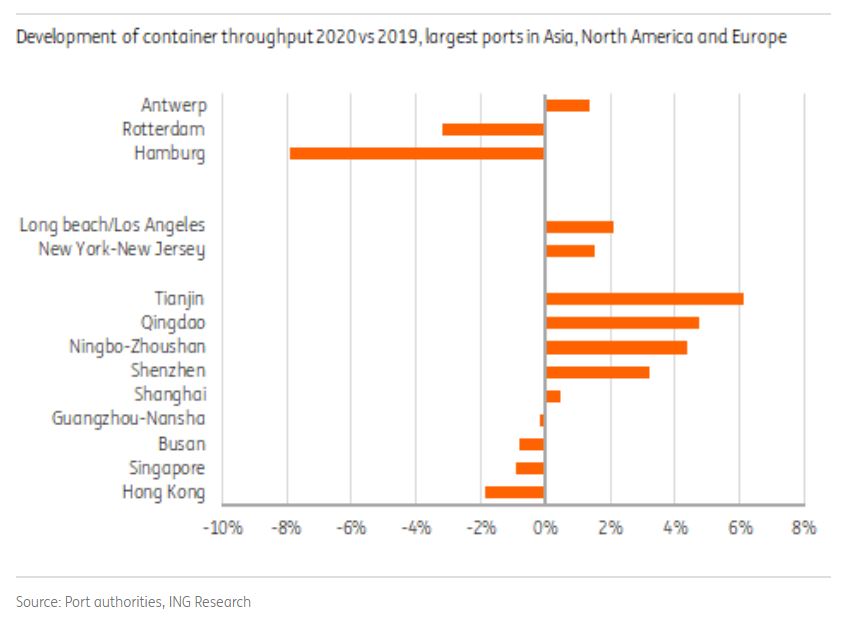 In contrast to the downturn during the financial crisis, when tariffs dropped among excess capacity, container liners managed to reduce their capacity right from the start of the pandemic in 2020 by taking ships out of the loops (‘blank sailings’). With the three big alliances – 2M, Ocean Alliance and The Alliance covering 80%-85% of the market – supply is less fragmented than a decade ago.

Following the quick return of volumes in the second half of 2020, delays, congestion in the ports and lack of available containers at the right location, tariffs spiked. At the beginning of March, rates on the general East-West trade still quoted three times, which may be even more for specific ports and trades. 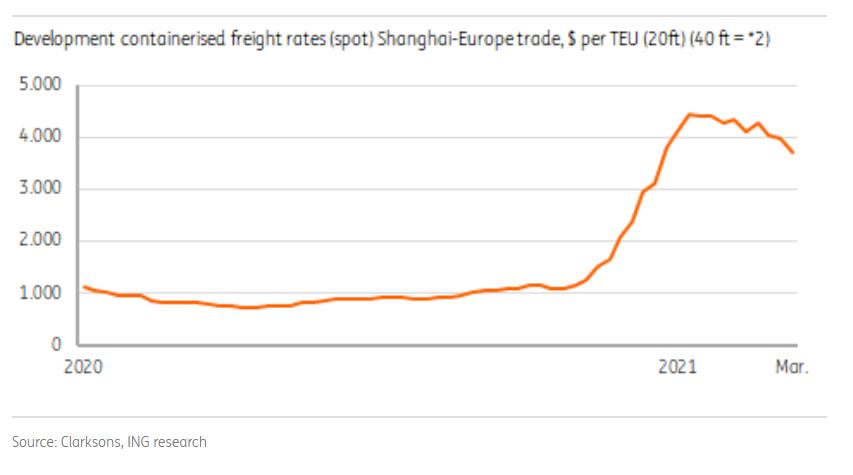 Container tariffs will remain high into 2021

Although production of new containers will catch up and more capacity is about to come online (+link), incorporating higher prices in term contracts with forward indicative price levels will be lifted longer. The average time charter rate for container vessels doubled compared to last year.

At the same time, capacity pressure is not over yet as sailing schedules are disrupted, and the efficiency of the fleet lower. On top of that, airfreight is often not an affordable option for higher valued shipments due to unusual high tariffs applicable here as well (+link).

A striking figure illustrating the exceptional circumstances in container shipping is the ongoing deteriorating reliability of container liners at the start of 2021. Hardly one out of three global calls of container vessels were on time in January (source: SEA Intelligence), where this is normally more than two out of three.

This causes inefficiencies and congestion in ports, as well as delays in deliveries further down the line.

Hapag-Lloyd had a very positive start to 2021, with an “exceptionally strong” demand for container transportation services, leading to a significant increase in freight rate levels. The company expects one of its earnings parameters (EBITDA) to more than triple in 1Q21 from the comparable prior-year. The company expects the current “exceptional situation” to “normalise” over the rest of this year but that the full-year 2021 EBITDA will still be above the prior-year levels and that, unlike in previous years, a large portion of this year’s earnings will already be generated in the first two quarters of the year.

Maersk believes the current “exceptional” situation where demand surge has led to bottlenecks in supply chains and equipment shortages, the first quarter of 2021 is expected to be even stronger than the final quarter of last year but that the market conditions will “normalise” throughout this year, starting in 2Q. Maersk’s consolidated EBITDA was up as much as 44% in 2020, also helped by lower bunker costs, while consolidated revenue was relatively flat (up approximately 2% year-on-year). In 2021, the company still expects an improvement in profitability, as measured by EBITDA, even after the strong growth in the prior year.

In the second half of 2020, dry bulk rates recovered and exceeded 10-year averages. As the main industrial regions worldwide return to growth, 2021 is expected to offer widespread recovery in dry bulk markets. 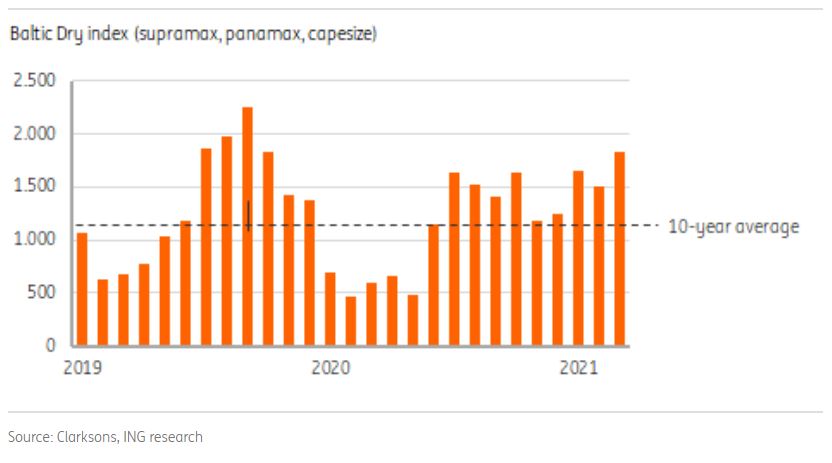 From boom to gloom: Tanker market in a Covid-rollercoaster ride

With the implementation of IMO 2020 rules pressing on capacity followed by the oil price collapse and massive speculative floating storage (reaching 11% of total fleet capacity in May 2020), tanker tariffs spiked in the first half of 2020, which resulted in a profitable year for many tanker shipping companies. However, after economic perspectives turned positive again and oil prices started to recover in mid-2020, tanker rates started to slump.

In February 2021, tanker spot earnings even dropped to the lowest levels in decades. Nevertheless, one to five-year time charter rates for tankers like Aframax, Panamax and Suezmax size have been more resilient, revealing some future confidence. 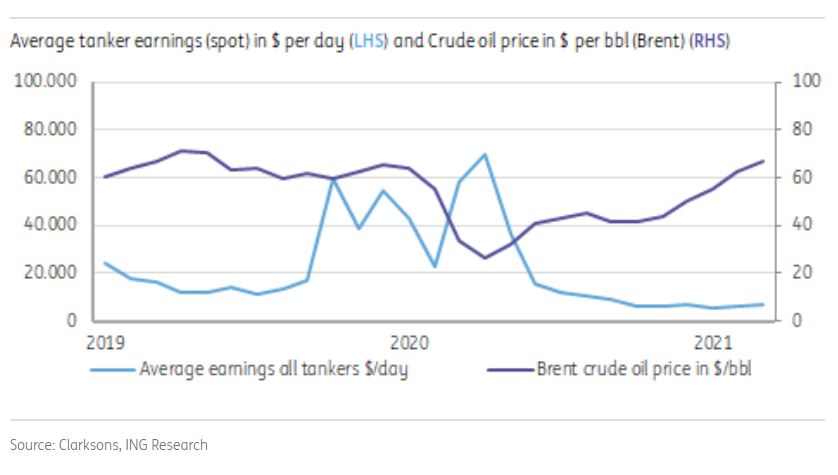 Due to less car driving and travel bans leading to the massive grounding of aircraft, global fuel consumption fell over 15% in the second quarter of 2020. At the same time, crude supply, as well as refining, were slashed. 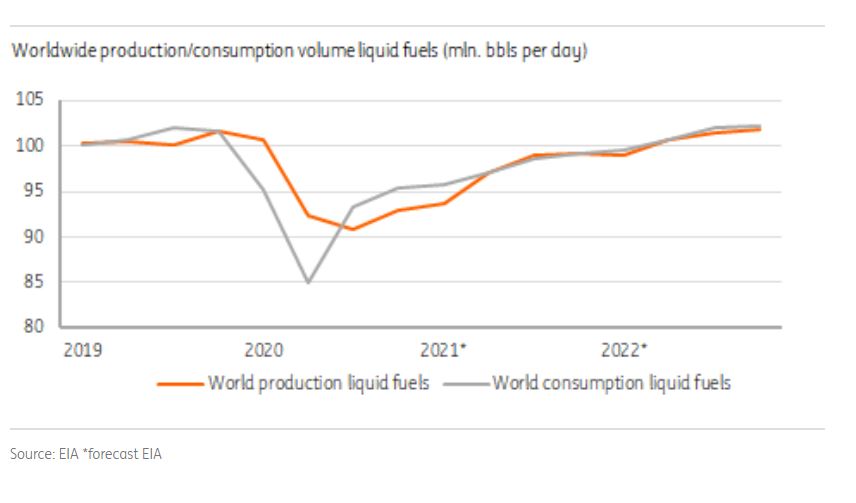 Although industrial demand for oil products has picked up since fuel demand from transport is still low, consumption will gradually return. Given the forecast of relatively weak demand and gradual uptake in the second half of the year, tanker rates are expected to remain low for at least the first half of 2021.
Liquid fuel flows won’t return to pre-pandemic levels before 2022
Source: ING