I’ll bet that if you ask anyone with an interest in the global upstream M&A if they could name the top three spenders through the first half of 2019, they would struggle to name the third. The easy one is Occidental (Anadarko), second place is Total through its acquisition of Anadarko’s African assets. But who was the third largest acquirer by spend in H1 2019?

The answer is Thailand’s PTTEP, snapping up US$2.9 billion worth of assets this year. In fact, Southeast Asian and Chinese national oil companies (NOCs) together made up around a third of global upstream M&A spend outside of North America in H1. OK, the global upstream M&A market was exceptionally weak through the first half of the year, with the global deal flow hitting almost a 20-year low as both oil prices and equity markets deteriorated. But Southeast Asian NOCs in particular seem undeterred and, following a recent tour through Bangkok, KL and Jakarta, I expect this to continue.

Meet the 3Ps – PETRONAS, PETRAMINA and PTTEP
Southeast Asia is one of the most important regions globally for future energy demand growth. LNG imports are expected to increase almost six-fold from ‘just’ 11 million tonnes (Mt) in 2018 to 64 Mt by 2030, accounting for almost a fifth of Asia Pacific LNG demand. Oil demand is also outpacing regional supply growth, and we forecast Southeast Asia’s oil import dependency rising from 50% today to more than 80% by 2030.

The key NOCs in the region are of course PETRONAS (Malaysia), PERTAMINA (Indonesia) and PTTEP (Thailand). Combined, the companies control over 50% of Southeast Asia’s oil and gas reserves and are major players in global LNG.

But like most Asian NOCs, the 3Ps suffer from declining long-term production profiles. While this in part reflects asset maturity at home, it’s also a consequence of a collective shortfall in global business development activity since 2015. This is now changing as the 3Ps look to boost their domestic output, and at the same time, expand through international M&A. Understanding their strategies is now more important than ever. 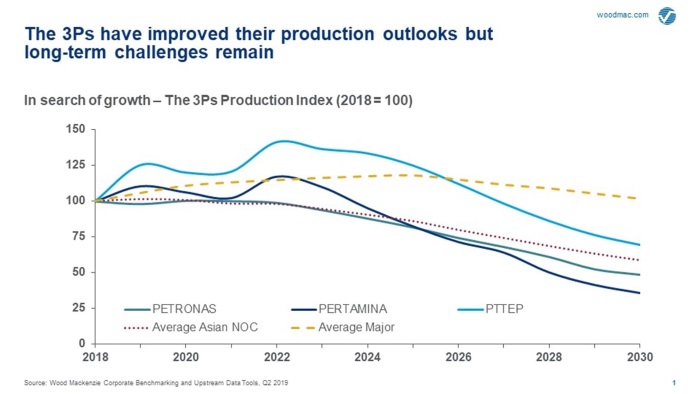 Firstly, the NOCs know perfectly well where their advantages lie – at home. Recent successful bids for production sharing contract (PSC) extensions have seen PTTEP and PERTAMINA become increasingly dominant in their own backyard. PTTEP’s portfolio has been significantly boosted by its successful bid for operatorship of Bongkot and Erawan PSCs from Shell and Chevron respectively, increasing production by 35% by 2023.

In Indonesia, PERTAMINA is pursuing production growth, having taken ownership of 10 domestic PSCs since 2015, though production potential is highly dependent on the company’s ability to select new technical and financial partners, and its project execution.

In fact, it’s likely that all 3Ps will look to farm-down positions and seek partners for technical and financial support. This is perhaps not surprising considering that we estimate PERTAMINA and PTTEP to spend US$32 billion from 2019-2023 to maintain their domestic supply outlook.

The second approach to future growth is securing supply through international plays.

PTTEP’s March 2019 acquisition of Murphy’s Malaysian business has added portfolio longevity, deepwater exposure and more oil-weighted output, while also allowing PTTEP to grow in their own backyard, a key part of their corporate strategy. PTTEP followed this with the acquisition of Partex Holdings for US$622 million, expanding their Middle East footprint with additional long-life assets.

For PETRONAS, the geographical focus for new business development is in Latin America, North America and the Middle East. In addition to the company’s entry into the LNG Canada project in 2018, PETRONAS’s $1.3 billion entry into the deepwater Brazil Campos basin with Petrobras, gave it further exposure to large, long-life assets.

While lacking the overseas acquisition success of PTTEP and PETRONAS in 2019, PERTAMINA has been looking to make additional forays into international M&A through their investment of French operator Maurel & Prom; a case of ‘watch this space’ as activity continues, particularly in Latin America and West Africa.

Expect more M&As in Asia Pacific region
I came away from my recent trip with a strong sense that more M&A activity is set to come from the 3Ps. If home really is where the heart is then more regional deals could follow. For PTTEP, the acquisition of Murphy’s Malaysian portfolio could well be followed by a trigger to acquire the US independent’s much smaller Vietnam position.

I also expect to see other divestments in Southeast Asia by US-focused players, such as Hess, ConocoPhillips and Chevron, seeking to redeploy capital towards lower-cost, higher-return opportunities elsewhere. Our upstream team has identified over US$14 billion of assets available in Southeast Asia, while US$32 billion worth of Australian assets could potentially change hands.

Meanwhile, for PETRONAS, the challenge is scale. With 10 exploration blocks in Mexico and pre-salt assets in Brazil, a focus on Latin America as well as developing opportunities in Central Asia and the Middle East strike me as a good fit.

But as always, the hard work lies ahead.

All eyes will be at the ASEAN Energy Business Forum happening this week in Bangkok. Our power and renewables expert, Mark Hutchinson, will also be speaking at the event. Do catch him there.
Source: Wood Mackenzie