The drastic improvements of oil spill response over 50 years

In March 1989, the Exxon Valdez oil tanker struck a reef off the coast of Alaska and spilled 37,000 tonnes of oil (257,000 barrels) into Prince William Sound. It was an environmental catastrophe with severe economic impact. It was also one of the big oil spills in the last five decades that served as a catalyst, pushing governments and industry to develop effective oil spill response.

A drastic decline in oil spills

It is important for Christian to make one thing clear in the beginning: as long as we need oil for heat and power, we will need to transport it. “And whenever you transport something, there is a risk of accident,” he says.

Christian Ingvorsen is a marine engineer who was educated in Maersk’s apprentice system in the 1980s. At the start of the 1990s, he worked for Roulunds, which manufactured containment boom systems for oil response and was eventually acquired by DESMI. He also helped write the “First Responder Oil Spill Response” manual and do live courses of training in oil response for Denmark and the Baltic countries for the International Maritime Organization (IMO).

So, let us start with some good news. Ship-based oil spills have reduced drastically in the last five decades. In the 1970s, the average number of spills per year was 78.8. By the 2010s it was 6.2. That is according to the International Tanker Owners Pollution Federation Ltd. (ITOPF), a non-profit organisation established on behalf of the world’s shipowners to promote an effective response to marine spills of oil and other hazardous substances.

Christian Ingvorsen says there are three main reasons we have 12 times fewer oil spills today compared to 50 years ago.

First is that today’s vessels are better, with a double hull. “Second, you have standard operational procedures now. When I was young, you didn’t have any manual to tell you what to do and in what steps. You just had the guy next to you tell you, ‘Do this and do that.’ You didn’t get any proper training. So the risk for you doing something wrong was much bigger that time. Thirdly the entire world has changed its attitude towards safety and being 100 % concentrated on your professional duties” 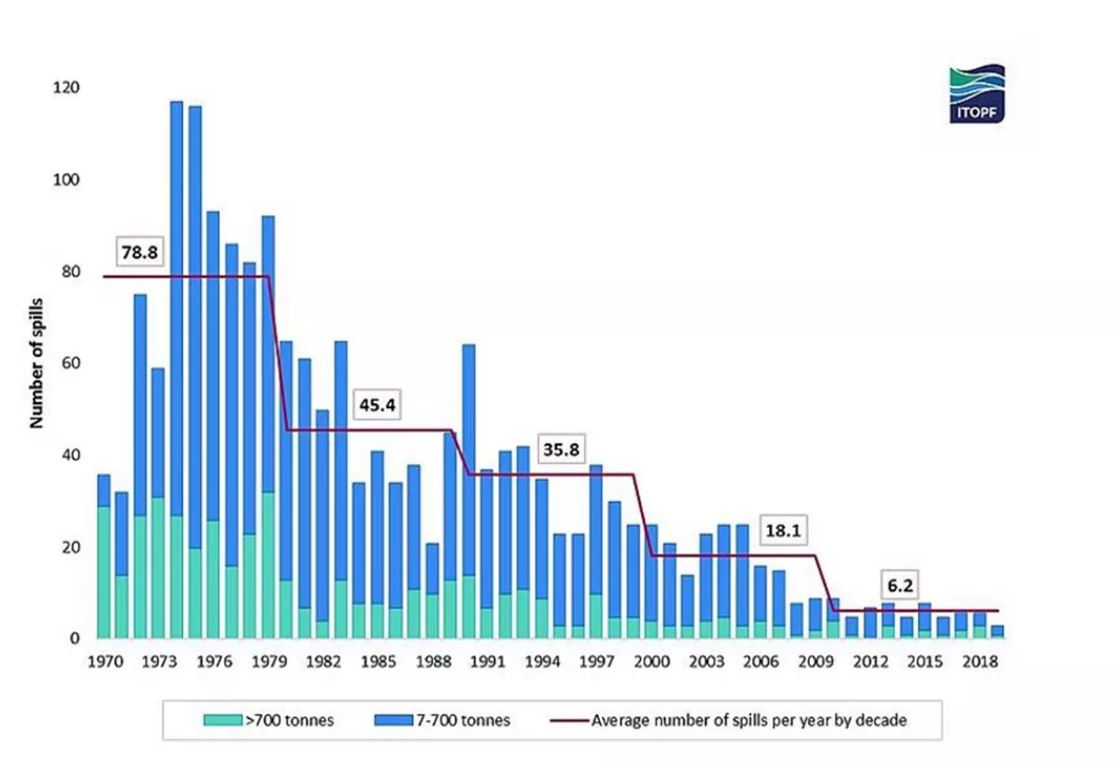 Christian points to four spills that have had impact on today’s oil spill response policies and guidelines.

In 1967, the Torrey Canyon ran aground on a reef on the southwest coast of the United Kingdom. It spilled 100,000 tonnes of oil into the English Channel, leaving beaches knee-deep in sludge. More than 15,000 sea birds were killed. It was the first major oil spill in British and European waters, leading to changes in the way people viewed the environment.

“It was the first time we realized: Whoa, something could happen. And it made a huge impact on the environment, because at that time, we didn’t have any sort of specialized equipment for actually recovering the oil,” Christian says. “So they sent in the Navy and the Air Force. They were trying to bomb the area to burn off the oil. And they used a lot of chemicals, which caused more damage than the oil itself.”

This also encouraged a number of European countries to build up their national contingency plans. That includes Denmark, which also formed its Ministry of the Environment in 1971.

Another big spill happened in Europe in 1978, when the Amoco Cadiz sailed into some rocks on March 16, 1978. It spilled 223,000 tons of light crude oil, spoiling a large part of the Brittany coast.

After two weeks, President George Bush declared a national emergency, and then a lot of things started happening. For its part, DESMI went to all its customers around the world and asked for their usable booms, then made an immediate shipment of 10,000 metres of booms and equipment to Alaska to help with the spill response.

Meanwhile, the environmental impact was massive as well. Seals, birds, otters and other wildlife were covered with oil. Just a drop of oil on a bird or mammal will affect its insulating abilities, causing the animal to freeze. A groundswell of volunteers also came to this remote part of Alaska to help clean the animals with detergents. 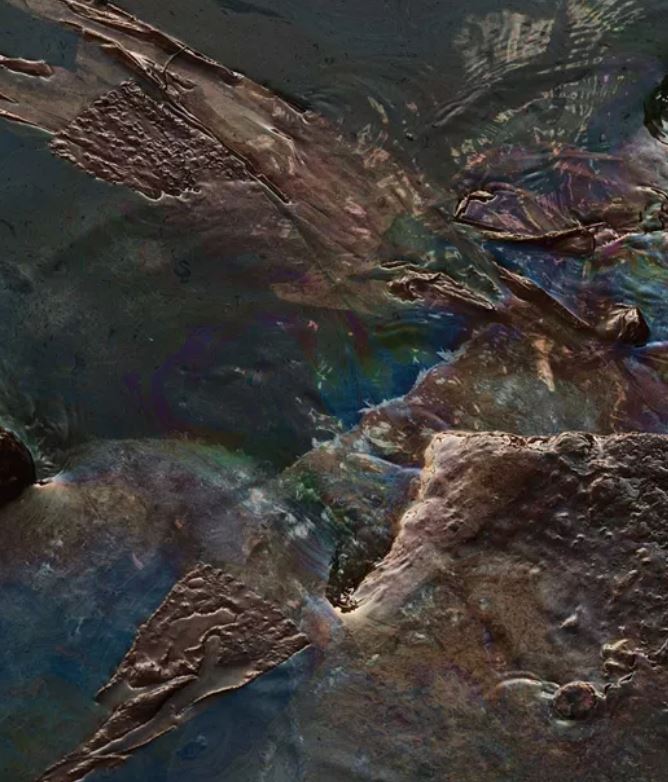 “What happened was that a lot of the birds died due to stress. You have to catch them, then wash them, then put them in small cages to dry and maybe even use a hair dryer to speed up the process,” Christian says. An estimated 100,000-250,000 seabirds died, as well as nearly 3,000 sea otters and hundreds of seals.

Beach cleaning was done with high-pressure steam. “What they realized 10 years later was that these steam cleaners removed all the bacteria and simply killed them. So the long term impact of cleaning so efficiently was much bigger than from the oil itself.”

The lesson formed today’s beach-cleaning practices. “They learned that you must use the water from from the same environment to clean with. So you should use salt water if it’s a saltwater environment, because the bacteria cannot survive in freshwater.”

By the 2000s the oil spill response practices were improving. This can be seen in the biggest spill in Danish waters, known as the Baltic Carrier Incident. The spill was due to a oil tanker collision in the Baltic Sea north of Germany in March 2001, spilling more than 2,000 tons of oil that drifted north to Danish waters. Uniquely, despite (or perhaps because of) the very viscous oil, the authorities managed to recover some 60% of the oil in the water. “This is far beyond normal, where a good operation may recover some 30% of the oil when still in the water,” Christian says, adding that the cold temperatures and type of oil meant evaporation rate was low.

“So if you have an oil spill in Denmark, if you’re the one observing, you should call the Police. They will be the first responders, and they will then call the appropriate authorities,” Christian says. Then the Danish Navy will take over if it is an offshore spill. If the oil hits the shoreline, the affected municipality has the responsibility for beach cleanup.

In the US, the Coast Guard has authority for initial response, along with the US Navy. In general around the world, the national authorities are responsible for the clean up operation and legislation. However, some countries have their own response teams, and other parts of the world use private contractors for their response teams. 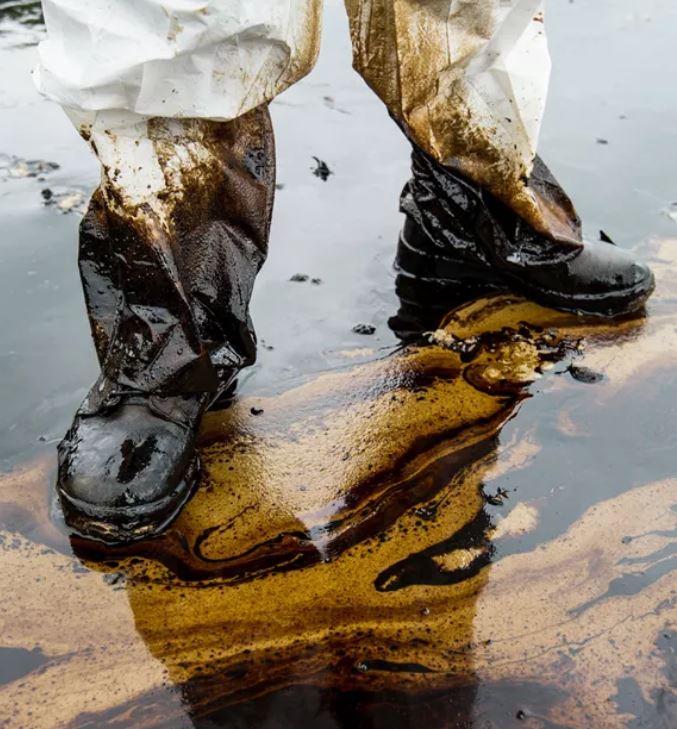 In the United States, the Oil Pollution Act of 1990 requires that tankers may not enter US waters unless they have an agreement with a private contractor who can help respond to a spill. Ship owners caught not following this rule are simply banned from sailing in US waters ever again.

Response falls into two general methods: mechanical or chemical recovery. Europe and the US focus mainly on the former, meaning you physically remove the oil from the water. It is generally seen as the better way environmentally but more expensive.

For chemical recovery, you put chemicals on the oil slick. This removes the surface tension of the oil, separating it into small droplets, which eventually sink. Then nature takes care of the oil – a process that takes a long time.

Mechanical recovery involves using oil containment booms, oil skimmers, sweep systems and more. As one of the world’s most experienced manufacturers of oil recovery systems, DESMI offers many different variants of the above, as well as training and more

Christian says that besides having the right equipment, one thing is vital: “Training, more training and even more training! People need to know how to use the equipment under stress, because you will always be under stress in such a situation. We so often see that because training costs money, it is not always continued after the initial purchase. But your people must know how to use the equipment in stressful conditions.” Training involves creating a line of communication on who does what, as well as learning to work around the slippery oil equipment without causing injuries. 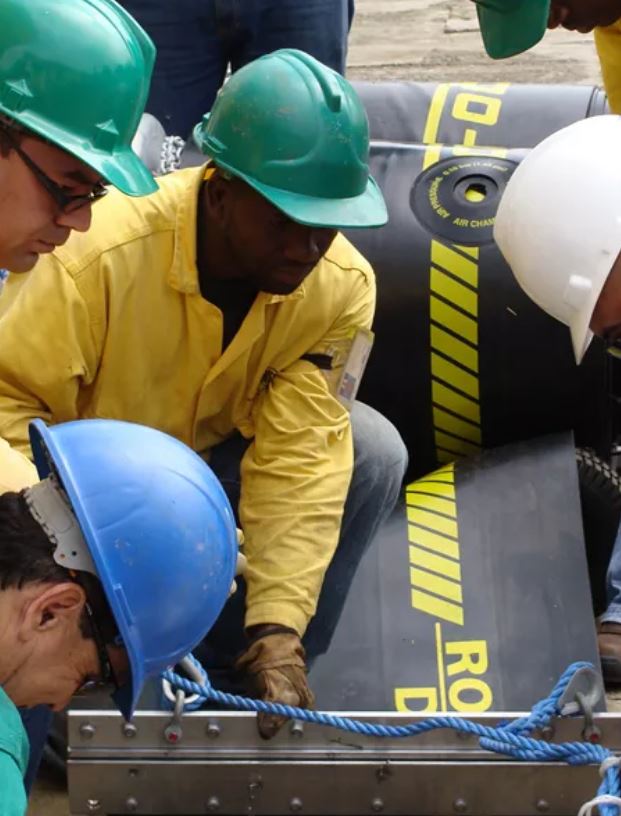 “It’s all about communicating who is doing what and what kind of expressions are we using? What kind of terminology? An interesting challenge is if you have two vessels and they are from different countries, and they need to communicate very precisely to recover the oil. This is first of all difficult under all circumstances, but the fact the one of the captains is in charge of the second captain can cause some communication issues.”

Every year the nine countries bordering the Baltic Sea participate in a drill, using different vessels, often using popped popcorn as the “oil”. Regional cooperations like this exist all over the world. However, Helcom – the name of the Baltic Sea Cooperation – is considered as one of the most successful.

“When your people are properly trained and have practiced a response regularly, then they feel confident with what they should do. You save a lot of time, you solve the problem, and you build confidence.”
Source: DESMI