US natural gas in storage rose by less than the five-year average for the second week in a row, as the Henry Hub summer strip surged following the release, despite forecasts of triple-digit builds in the weeks ahead.

The amount of natural gas in US storage facilities increased 70 Bcf to 2.210 Tcf in the week that ended April 24, the US Energy Information Administration reported Thursday.

The injection was just above the consensus expectations of an S&P Global Platts’ survey of analysts, which called for a 69 Bcf build. The survey has missed the mark by an average of 3 Bcf over the past three weeks. The build was 23.9% below the 92 Bcf injection reported during the same week a year ago and just below the five-year average build of 73 Bcf. 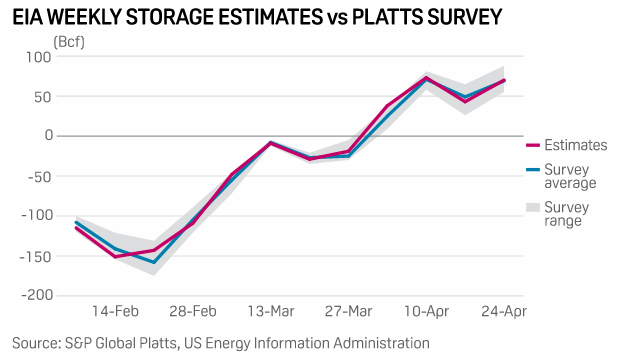 The NYMEX Henry Hub June contract rose 4.5 cents to $1.88/MMBtu following the release of the weekly storage report. The entire summer strips, June through October, added an average of just over 5 cents to $2.20/MMBtu. Since last week, the balance-of-summer strip has sold off by roughly 19 cents while the winter 2020-2021 strip has sold off by about 8 cents, widening spreads between the two seasons.

After two weeks of below-average builds, S&P Global Platts Analytics’ supply and demand model expects a 105 Bcf addition to US storage volumes for the week ending Friday. This would be more than 30 Bcf above the five-year average for the week and undo the recent dents made in the storage surplus.

With virtually all US producers making massive reductions in drilling and completion activity, dry gas production has started to show some declines.

Total US dry gas production fell 0.5 Bcf Thursday to 91.5 Bcf due to drops primarily in Texas and the Northeast. Texas production fell 341 MMcf in total to 23.8 Bcf as drops in the Midland Basin and East Texas Haynesville accounted for the majority of the decrease. The Northeast inched down 139 MMcf to 32.2 Bcf, according to Platts Analytics. April month-to-date production has averaged 92.2 Bcf/d, or 3.2 Bcf/d above 2019. Total US production has averaged 92 Bcf/d the past 10 days, 300 MMcf/d below the April 1-20 average.

As US states discuss tentative plans to begin easing restrictions related to the coronavirus pandemic, demand may see some upside throughout May. Weak oil prices and declining rig counts also present a bullish risk to prices at Henry Hub for the second half of the year, according to Platts Analytics. 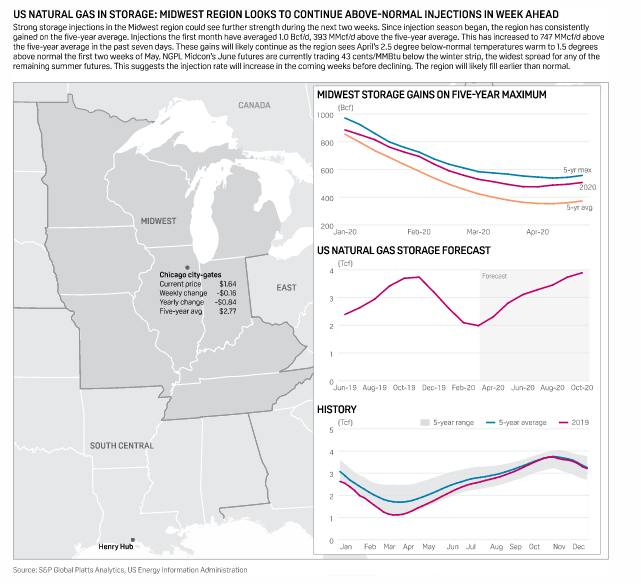