The Chairman of Baleària, Adolfo Utor, presided the event accompanied by the Chairman of Armon, Laudelino Alperi, the director general for the Merchant Marines, Benito Núñez, and the regional presidents of Valencia and the Balearic Islands, Ximo Puig and Francina Armengol, among other authorities.

The shipping company is leading this Spanish project, which is pioneer in the world, commissioned by a Valencian-based shipping company to an Asturian shipyard to be used in the Balearic Islands. Both companies, the shipowner and builder, have joined forces to complete this pioneer and innovative ship construction project with support from outstanding Spanish and international partners.

This is the third LNG-powered vessel to be built by Baleària, which will add two conventional ferries to its fleet this year also sailing with this energy: the Hypatia de Alejandría, this week, and the Marie Curie, within the next few months.

The Chairman of Baleària, Adolfo Utor, presented the construction of the first high-speed passenger and cargo ship in the world powered by dual natural gas engines at the FITUR international tourism fair. Along with the shipyard Armon de Gijón, the shipping company is leading this worldwide pioneer project with the support of outstanding international partners such as Wärstilä, Incat Crowther and Marintek. The Chairman of Armon, Laudelino Alperi, the director general for the Merchant Marines, Benito Núñez, and the regional presidents of Valencia and the Balearic Islands, Ximo Puig and Francina Armengol, respectively, accompanied the shipping company Chairman for this event. This is the third LNG-powered vessel to be built by Baleària, which will add two ferries to its fleet this year also sailing with this energy: the Hypatia de Alejandría, this week, and the Marie Curie, within the next few months. 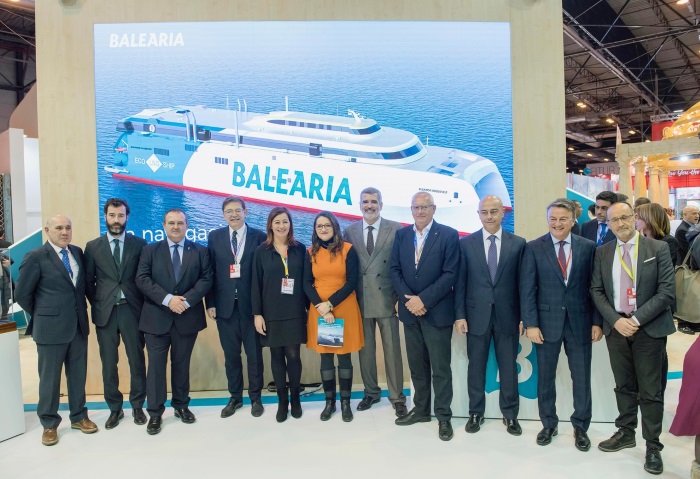 An innovative project with international collaboration

This eco-efficient fast ferry is being built by the shipyard Armon de Gijón with a design by the Australian engineering firm Incat Crowther, a world reference in high-speed aluminium ship technology, in close collaboration with the Valencia-based engineering firm, Cotenaval, which is responsible for the technical concept and project coordination. The Finnish company Wärtsilä, a world leader in intelligent solutions and technologies for the shipping market, is manufacturing the engines and propeller system as well as the gas plant. Speed and seakeeping performance tests have been conducted in the Norwegian hydrodynamic testing channel Marintek-Sintef, which has extensive experience testing these types of ships, and ship classification will be the responsibility of the company Bureau Veritas. All the smart ship technology aimed at the vessel’s eco-efficiency and enhanced passenger experience is being handled by our teams in collaboration with the technology integrator Altran. The decorative and exterior design project for the fast ferry has been developed by the ship architecture firm Oliver Design in Getxo.

The new ship particularly stands out because it’s the first int he world to be built with dual fuel engines so it may be powered by natural gas. Four Wärtsilä dual fuel engines will be installed with 8,800 kW of power each in addition to four waterjets for propulsion, two gas generators and another two diesel generators for electricity. The four-stroke diesel engines the vessel will be equipped with are considered to be the most efficient in the world by the Guinness Book of World Records.

These innovative engines will allow the fast ferry to reach an operating speed of 35 knots (with a maximum speed of more than 40 knots) all while maintaining the highest levels of comfort. The twin-hull catamaran will feature 400 nautical miles of autonomy with the two LNG storage tanks. On the other hand, the design of this aluminium vessel combines behavioural enhancements deriving from the next-generation shapes developed by Incat Crowhter and a specific third central hull to house a retractable T-Foil. It is worth mentioning that the ship meets the most demanding environmental and energy efficiency standards.

Baleària’s investment in the construction of this ship totals 90 million euros. Aluminium cutting began last December and the vessel is expected to be in operation in the Balearic Islands in the summer of 2020. Furthermore, the Chairman of Baleària revealed that this fast ferry will be baptised with the name Eleanor Roosevelt, “the author and promoter of the Universal Declaration of Human Rights and a gender equality activist”. This is the shipping company’s sixth vessel to pay homage to pioneer women in their respective fields as part of its commitment to one of the Sustainable Development Goals: equality and women’s empowerment.

The world’s most efficient and longest catamaran

Besides being the first passenger and cargo fast ferry in the world to be powered by dual natural gas engines, it will also be the longest in operation. Specifically, the ship will be 123 metres long with a 28 m beam and will have capacity for 1200 passengers as well as a hold which may store 500 linear metres of lorries and 250 passenger cars or just 450 passenger cars.

The smart ship technology along with the interior design will create a comfortable, pleasant and innovative passenger experience throughout each trip from ticket purchasing to boarding and the onboard services. Moreover, the shape of the ship was specially designed during the channel-based testing to considerably reduce vertical acceleration for more comfortable journeys by lowering vibration and noise to unprecedented optimal levels.

This week, Baleària is set to receive the Hypatia de Alejandría, the first of the two smart ships with natural gas engines being built. It will become the first ferry on the Mediterranean powered by gas. At the same time, another project has already begun to refit six of its ships to sail with LNG. This one will take two years to complete and has been subsidised by the EU.

Baleària’s strategic commitment to LNG, which was planned eight years ago, fulfils social responsibility and profitability criteria as it moves ahead of the ever more demanding contaminating gas regulations. Thus, the shipping company expects to have at least half of its fleet of ferries sailing with this clean energy within the next three years and reach one hundred percent of its fleet within ten years. Liquefied natural gas is an environmentally-friendly clean fuel that more than complies with current and future pollution standards. Its use reduces CO2 emissions by up to 35%, NOx by 85% and sulphur and particles by 100%, which means it has an immediate impact on improving air quality and limiting the greenhouse gas effect.
Source: Balearia

2019-01-25
hellenicshippingnews..
Previous: One year of the Seafarers Happiness Index – What have we learned?
Next: Conoship Decreases Significantly The Ecological Footprint Of Shipping