Demand for bulk carriers in the global grain and soya trades is receiving a boost from strongly rising imports into China. These are mostly long-distance movements, further enhancing bulk carrier employment. After expanding over the past twelve months, signs emerging in recent weeks point to the upswing continuing into 2021 amid much higher purchases of corn especially, but also of wheat, barley and sorghum.

The pattern unfolding marks a major shift in the trend. China’s grain and soya imports total rose by over a quarter in the 2019/20 year just ended, when wheat, coarse grains and soyabeans purchases rose after falling in the previous 2018/19 marketing year ending September 2019. During the current 2020/21 year further growth in soyabeans imports seems uncertain, but the smaller grains component looks set to see rapid enlargement amid shortages evolving.

Imports resume an upwards trend
China’s imports of cereals and oilseeds have become a larger part of world seaborne trade in these commodities over the past decade. Annual volumes have more than doubled. The chart shows US Department of Agriculture data which includes wheat, corn and other coarse grains, plus soyabeans and soyameal (meal imports into China are minimal). Land movements are included but most imports are seaborne. A standard October to September marketing year is used except for wheat, which is measured on a July to June year basis.

In the 2019/20 marketing year ending September 2020, calculations based on USDA figures show that grain and soya imports into China totalled 121.5 million tonnes, a 25.2mt or 26% rise from the previous marketing year. This total was more than double the volume recorded a decade earlier, when the annual average for 2009/10 and 2010/11 was just under 56mt. Extra imports of the largest component, soyabeans, comprised over 70% of overall grain and soya growth recorded during the decade.

While China is almost self-sufficient in grain, with consumption satisfied mostly by domestic grain production, soya consumption is heavily dependent on imported supplies. Domestic soyabeans production has increased, but still comprises only about one-sixth of supplies. Expansion of soyameal use in livestock feed manufacture, especially for feeding pigs and poultry, and also expansion of soyaoil use, has been mainly facilitated by soyabeans imports. These imports are received by coastal crushing mills producing meal and oil. 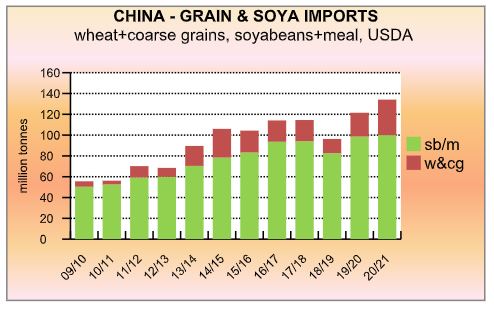 Soya volumes imported in processed form as soyameal are minimal, because a large-scale domestic milling industry in China performs the crushing of beans at or near import locations, benefiting from lower tariffs on beans than on meal. Soyabeans imports rose from about 52mt annually a decade ago to reach 94mt in 2017/18. A setback then occurred, cutting the volume to under 83mt in the following year when livestock feed consumption was reduced by an outbreak of African Swine Fever, causing culling of pig herds. Recovery ensued in 2019/20, resulting in an upturn in soyabeans imports to over 98mt.

Imports of wheat and coarse grains (corn, sorghum, barley and other grains) into China a decade ago were relatively small at 4-5mt annually, followed by an uptrend for a few years to 28mt in 2014/15. Annual volumes then declined, to under 14mt in 2018/19. But in the past twelve months, in the 2019/20 marketing year, an abrupt two-thirds rise to almost 23mt was seen.

Some of the trend growth seen in wheat and coarse grains imports during the past decade as a whole reflected increased demand for barley, especially malting barley used in brewing. Limited wheat and corn imports volumes also rose, although these were minor parts of China’s market where domestic harvests and stocks are the dominant supply source.

Domestic production, stocks and consumption
Grain production in China is conducted on a vast scale. Annual wheat and coarse grains harvests in the past decade rose for several years to reach 404mt in 2015. During the next four years output was remarkably stable, averaging 400mt, including 402mt in 2019. Weather conditions through the growing season are often the biggest factor influencing changes in output quantity and quality. The recently completed 2020 harvest is estimated at 403.4mt. However, some analysts expect this total to be revised downwards eventually if the corn output calculation is reduced compared with the present estimate.

Soyabeans production is on a much smaller scale. Annual harvests have varied over the past ten years in a 12-18mt range. Since 2015 a rising trend has been achieved, although the 2020 harvest estimate of 17.6mt is 3% below last year’s volume.

Stocks of grain in China accumulated from successive harvests are huge, but official figures are not available because this information is classified as a state secret. Consequently USDA’s calculations, based on estimates of supply and demand, are widely accepted as a valuable indication. In recent years it has been evident that China’s corn stocks were excessive, and government agricultural policies aimed to reduce these significantly by an unspecified amount. That strategy appears to have been completed within the past few months.

Facilitated by underlying upwards trends in production and imports, domestic consumption of grain and soya in China has risen substantially over the past decade. Several influences contributed to this outcome. Population growth, continued urbanisation (more people living in towns and cities), rising living standards amid strengthening economic activity, and changing diets for a large proportion of the population unfolded. All these features were instrumental in raising consumption of wheat, coarse grains and soyabeans.

Contrasting with changes tending to strengthen soya consumption, a negative aspect is attempts to reduce the average protein meal share of livestock feed rations. Two years ago China’s Feed Industry Association introduced new standards which were estimated to potentially lower the use of soyameal by as much as 11mt annually (equivalent to 14mt beans), with a direct impact on imports. The extent to which this standard has been implemented is unclear.

A reinvigorated expansion
Another large increase in China’s grain and soya imports is forecast in the current 2020/21 year, as shown in the chart. Bulk Shipping Analysis calculations, using USDA estimates published in early November 2020, suggest a rise of 12.6mt or 10%, raising the total to 134.1mt. Soyabeans imports are expected to increase marginally by 1%, to 100mt. Most of the growth is envisaged in the grain category, where higher corn purchases especially, accompanied by extra volumes of wheat, barley and sorghum could raise grain imports by 11.2mt (49%) to 34.1mt.

What are the influences which are likely to support this expansion? A general underpinning factor is China’s economic recovery from the severe downturn caused by government measures designed to contain the coronavirus pandemic. Assuming that the virus remains contained, a positive trajectory for the economy implies support for cereals and oilseeds consumption. There are also more direct influences.

Expectations of increasing soyameal and soyaoil demand suggest that imports of soyabeans into China will remain on an upwards trend, although after the main livestock sector recovery from disease, slower growth in meal use than seen in the past year is implied. As mentioned the official USDA (early November) forecast – which is based on input from various departmental agencies and approved by the department’s World Agriculture Outlook Board – is 100mt imports for marketing year 2020/21.

Opinions vary, however. USDA agricultural economists based in Beijing recently indicated that a lower 95mt total is likely in 2020/21, 4% below the volume of soyabeans imports in the previous twelve months. Their analysis adopts a more cautious view, pointing to the possibility of a gradual reduction of excessive beans stocks after recent heavy buying and very high monthly import volumes. If this stock drawdown occurs, it could be accompanied by weaker imports in the period ahead.

Varying opinions about likely future grain imports are also evident, but on the upside. The official USDA early November forecast for China’s 2020/21 wheat and coarse grains imports is 34mt, as mentioned, an almost 50% increase. This total includes a forecast 13mt for corn. But the Beijing-based USDA analysts are predicting a substantially higher corn volume, at 22mt. Moreover, some independent forecasters suggest that an even higher figure of up to 30mt could be seen.

These ideas imply potential for a much larger rise in China’s grain imports than now predicted in the current marketing year ending September 2021, perhaps of up to 25mt or 20%. But it seems possible that extra corn volumes may be partly offset by more limited growth than now expected in imports of other grains, restraining the expansion. Nevertheless, and despite a possible downturn in soyabean imports, the overall grain and soya imports total could strengthen by more than the 10% increase presently forecast.
Source: Article by Richard Scott, managing director, Bulk Shipping Analysis and visiting lecturer, London universities for Hellenic Shipping News Worldwide (www.hellenicshippingnews.com)

Previous: ‘Iran self-reliant in port construction sector’
Next: LNG Shipping Rates Took a Dive During the Third Quarter, as Demand and Outages Took Their Toll