Shifting oil product trade flows have implications for the way the market assigns value to tanker routes. In a two-part series, S&P Global Platts shipping editors look at the impact of new trends in fuel demand and supply on both sides of the Atlantic.

As trade flows on the US Gulf Coast-Brazil tanker routes are growing, Americas freight market participants are considering shifting the basis of hedging risk and term contracts from the traditional benchmark 38,000 mt USGC-UK Continent run to the emerging market barometer route in the Americas.

Major shipowners surveyed by S&P Global Platts said because the amount of cargo trading from the USGC to Brazil was moving far beyond the trade flow volume on the traditional USGC-UK Continent route, the new pacesetter to South America’s east coast would provide a more robust base for a regional index, to serve as reference price in term contracts.

In fact, several tanker owners who had placed their 2020 Contracts of Affreightment (COAs) on the 38,000 mt USGC-UKC freight assessment index, also known as the Baltic Exchange’ s TC14, said they were quickly losing confidence in the liquidity of the route.

“The USGC-Brazil run is a more frequent run every single day in comparison to the traditional USGC-UKC benchmark, as the trans-Atlantic arb has become almost impossible to work and traded volumes are reduced to a minimal number of nominations for term contracts,” one of the surveyed ship owners said.

While Mexico takes first place among the Americas petroleum products importers, runner up Brazil holds the trump card – a large number of counterparties are involved in the USGC-Brazil tradeflow, while Mexico’s main charterer is state-controlled Pemex’ international trading arm, PMI. 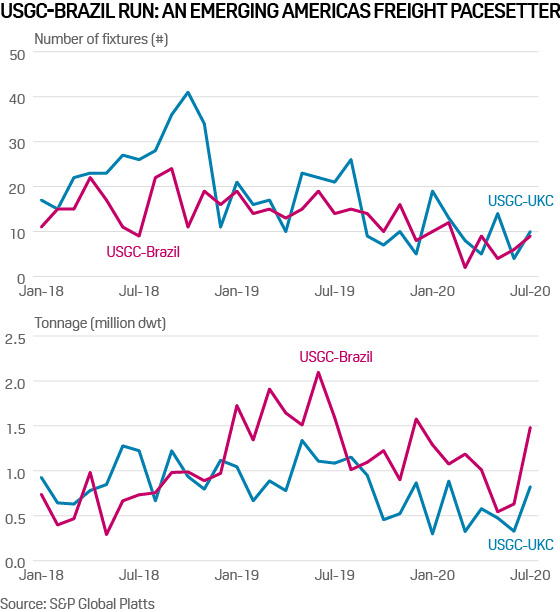 Assuming year-on-year rangebound refinery utilization of 1.7 million b/d, the country is expected to resume its import drive for the rest of the year, although the untamed spread of COVID-19 remains a key watch point.

In comparison, the EIA had Northwest Europe importing 152,000 b/d of diesel from the US in 2019, which has dropped to 128,000 b/d on the back-haul USGC-trans-Atlantic route so far in 2020, according to S&P Global Platts trade flow software cFlow, as the arbitrage has been marginal at best.

Instead of sourcing diesel on the USGC, Europe has increasingly turned to the Middle East for middle distillate imports during the past couple of years, as refining capacity in that region increased 6.4% during the 2015-2019 period and is forecast to rise another 3.4% in 2020 and close to 17% by 2025 compared with 2020, Platts Analytics data shows. So diesel flow on the backhaul route from the USGC is losing out against the shorter-distance and more attractively priced Middle Eastern market.

Platts fixture logs paint a similar picture: In 2018, spot fixtures heard on the USGC-Brazilian run made up a 39% share when totaled with the number of spot transactions on the USGC-UKC route. This share increased to 48% in 2019, but dipped by six percentage points in the January-July 2020 period, as Brazil exported products to the US Atlantic Coast and Europe amid a pandemic-driven fall in domestic demand.

Another noticeable trend is the increasing volume of the larger LR1 tonnage, carrying 60,000 mt, on the USGC-Brazil route as charterers are looking to take advantage of the favorable economy of scale, resulting in an average 20%-24% savings, when shipping diesel in the larger-sized ship during 2019 and 2020, Platts data shows.

Towards a robust clean tanker benchmark

Major exchanges have noticed the shift in liquidity between the Americas traditional and emerging clean tanker routes and have started their research on market share, price correlation and the number of counterparties as well as seeking potential sponsorship. 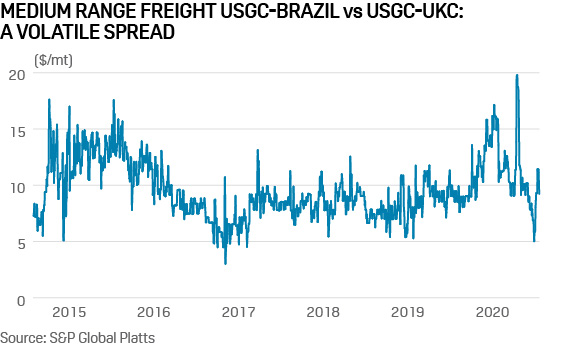 Past experience shows that perfectly correlated markets tend to not generate new liquidity, as trade defaults back to the traditional benchmark, using historical spreads between the traditional and the emerging benchmark markets.

A high number of counterparties increases the chance of good liquidity in a derivatives market. For hedging and term contract purposes, ship owners clearly prefer a Forward Freight Agreement contract based on the 38,000 mt Medium Range route, as that tanker class is the work horse in the Americas clean tanker market and can load up to 40 ft draft at any USGC terminal, while LR1s are known to load up to a draft of 43-44 ft.

As for the FFA settlement index, Americas market participants said they preferred a robust history of price assessments aligned with the close of the major exchanges at 01:30 pm CST.

Extending liquidity beyond the tanker markets to commodity players is facilitated by a freight assessment that closes with the same time stamp as the product futures contract, such as the Platts Market on Close assessment process. An index closing ahead of that timing tends to be a flawed settlement mechanism in that it misses a major portion of the Americas trading day.

While a transition from the outgoing to the incoming benchmark will likely be rocky while the market determines whether or not to switch to a new trading format, freight traders are looking to embrace a “brave new world” in search of greener pastures.
Source: Platts

EIA forecasts 10% decline in US annual energy-related CO2 emissions in 2020, lowest in years