The Drewry Container Port Throughput Indices are a series of volume growth/decline indices based on monthly throughput data for a sample of over 220 ports worldwide, representing over 75% of global volumes. The base point for the indices is January 2012 = 100.

In August 2019, the global container port throughput index declined to 133.8 points, after reaching an all-time high of 134.8 points in July 2019. A lull in August was seen last year too. However, the August 2019 figure was 3 points higher than in August 2018 (representing 2.3% growth) and nearly 11.8 points up on the August 2017 figure of 127 points.
Africa registered the highest monthly growth of 7.4% (7.9 points) with the index touching 114.5 points which was the highest in the last 19 months. However, the index figures for Africa are based on a relatively small sample. We expected container throughput to increase in August, similar to the trend witnessed in the last few years.
While China and Asia (excl. China) both saw annual growth of close to 2.0%, their month-on-month growth varied. For China it was slightly down by 0.4% whereas the drop was at a much higher 2.3% (3 points) for Asia (excl. China).

The month-on-month index figures for Europe in August (traditional holiday period) showed the second largest decline of around 2.1% (2.7 points) after Asia (excl. China) which recorded a large decline of 2.3% (3.0 points).

All world regions except Latin America experienced annual growth. The index for Latin America has gradually inched up and is now approaching an 11 month high.
North America achieved an increase of 1.4% (2.0 points) over July 2019 and 3.9% (5.6 points) over August 2018. 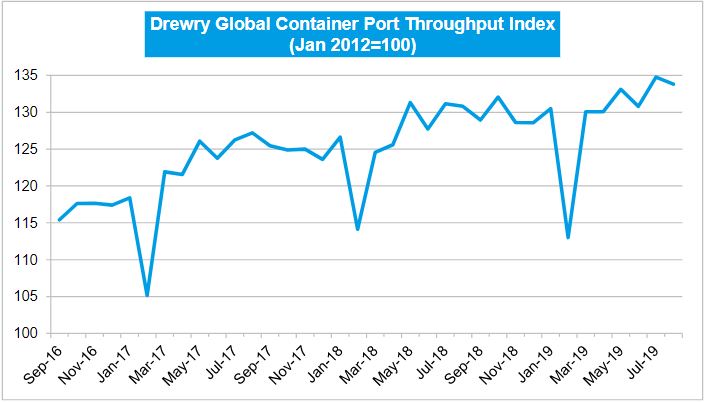 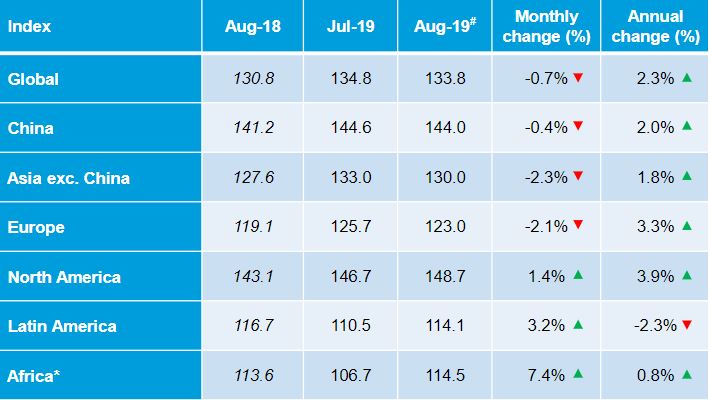 * Note that the index figures for Africa are based on a relatively small sample, and should be viewed with caution
# All index figures for August 2019 are preliminary, subject to change next month
Source: Drewry Maritime Research