Shipping number of the week: Most VLCCs delivered in 40 years

The Very Large Crude Carrier (VLCC) fleet has grown at a staggering rate of 8% year to date in November. The 65 VLCCs delivered in the first 11 months of 2019 will mark the highest number of deliveries since 1976.

A total of 19m DWT has been delivered in the total VLCC fleet, whereas only four ships, equal to 1m DWT, has been demolished in the same period, setting the industry up for a hard supply and demand balance in the future.

The previous record, in the last four decades, was set in 2011 which saw the delivery of 62 VLCCs. With a month left of 2019, the record from 2011 is set to be broken by a fair margin with another 4 VLCCs scheduled for delivery in the final weeks of 2019. The all-time record remains the 116 VLCCs delivered in 1974. 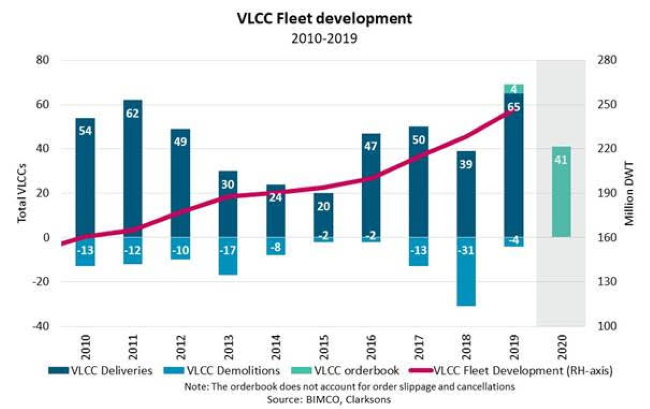 The VLCCs freight rates skyrocketed on 11 October 2019 to record-breaking levels of USD 307,888 per day due to a combination of tensions in the Middle East, tightening of the US sanctions regime and the upcoming IMO 2020 Sulphur cap. However, anecdotal evidence suggests that all contracts above the USD 200,000 per day level fell through, once the market realized that the spike was only temporary. The freight rates have since come down but remain at high levels.

Although, the VLCC market is currently faring quite well with the average VLCC-rate set at USD 102,142 per day on 22 November 2019, the high fleet growth will certainly prove challenging and have negative consequences for the fundamental supply and demand balance.

BIMCO expects the crude oil tanker fleet to grow of around 1.6% in 2020 due to a combination of fewer deliveries and higher demolition activity.

IMO2020 is lurking just around the corner, which could bring a solid winter market around for the crude oil tanker market, as crude oil is in high demand for refineries around the world. However, BIMCO does not buy into the market hype and expects that this demand boost will not make up for the general VLCC oversupply.
Source: BIMCO

Keeping cool in a hot market

Autonomy – a solution looking for a problem?