The Suez Canal and the SUMED Pipeline are strategic routes for Persian Gulf crude oil, petroleum products, and liquefied natural gas (LNG) shipments to Europe and North America. Located in Egypt, the Suez Canal connects the Red Sea with the Mediterranean Sea, and it is a critical chokepoint because of the large volumes of energy commodities that flow through it. 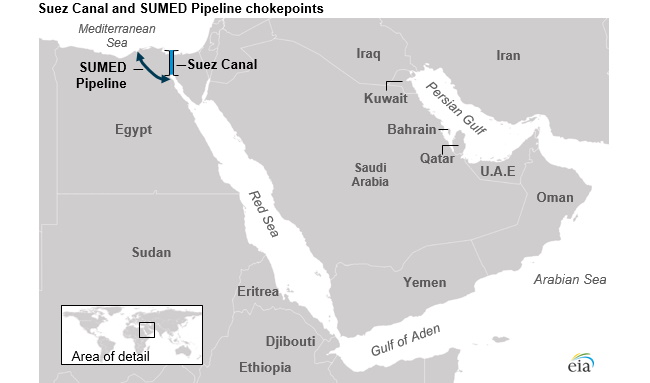 Since 2016, growth in northbound total petroleum flows through the Suez Canal and the SUMED pipeline has slowed, and southbound flows through the canal have risen substantially. In particular, the Suez Canal is gaining importance as a southbound route for U.S. and Russian crude oil and petroleum products to destinations in Asia and the Middle East. 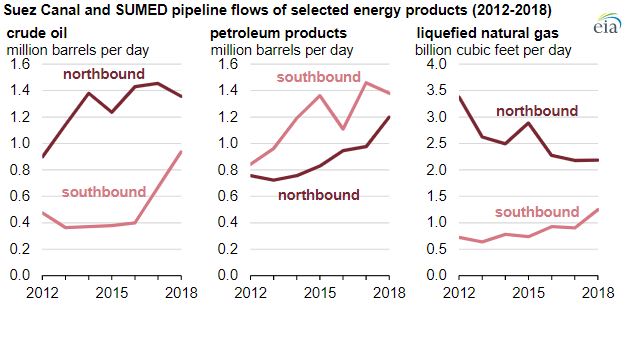 Slightly more than half of total petroleum transiting the Suez Canal in 2018 was sent northbound to destinations in Europe and North America. Petroleum exports from Persian Gulf countries, such as Saudi Arabia, Iraq, and Iran, accounted for 85% of Suez Canal northbound traffic. Northbound flows of petroleum products have risen in recent years, particularly as more ultra-low sulfur diesel fuel has been shipped from Saudi Arabia to European countries. 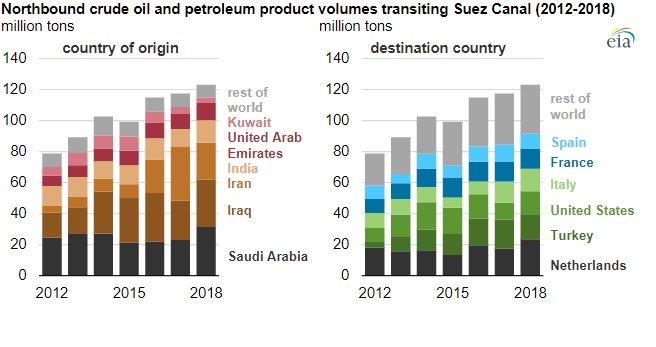 Southbound crude oil shipments, mainly to Asian markets such as Singapore, China, and India, have more than doubled in the past two years. Petroleum exports from Russia accounted for the largest share (24%) of Suez southbound petroleum traffic. Increases in Libya’s crude oil production and exports in 2018 also contributed to a rise in southbound shipments. In the past two years, increased production and exports of U.S. crude oil and petroleum products—especially liquefied petroleum gas—have also increased southbound traffic through the canal. 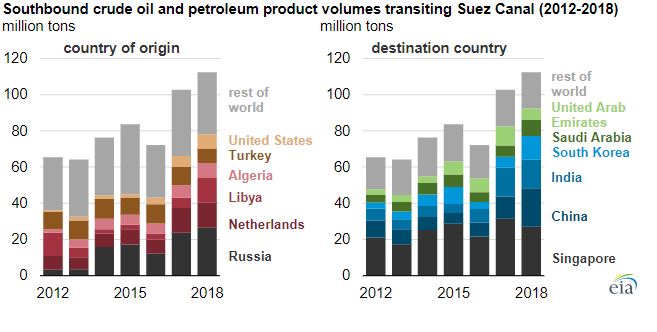 Overall LNG flows through the Suez Canal have declined in recent years. Nearly all (98%) of the northbound LNG transit is from Qatar and mainly destined for European markets. Although Qatar remains a key exporter of LNG through the canal, it has been diverting more cargoes to Asia in recent years.

Changes in LNG traffic through the Suez Canal also reflect the growth in U.S. shale gas production and LNG exports, falling LNG demand in some European countries, and competition for LNG in the global market, especially in Asia.

The 200-mile long SUMED Pipeline transports crude oil northbound through Egypt from the Red Sea to the Mediterranean Sea. Crude oil flows through two parallel pipelines that have a total capacity of 2.8 million barrels per day. The SUMED Pipeline is the only alternative route to transport crude oil from the Red Sea to the Mediterranean Sea if ships cannot navigate through the Suez Canal. Crude oil flows through the SUMED Pipeline have declined since 2016 as a result of the shifting oil trade patterns and a widening of the Suez Canal. 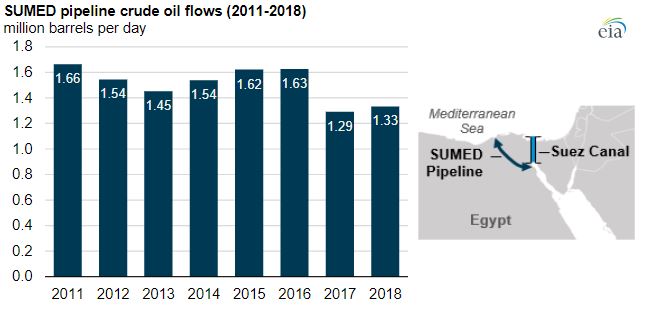