Battle Of The Biofuels: Renewable Diesel vs. Biodiesel

Fuel standards programs such as the federal Renewable Fuels Standard (RFS-2) and California’s Low-Carbon Fuels Standard (LCFS) have incentivized fuel producers to innovate and create new renewable fuels like biodiesel and renewable diesel. As new low-carbon diesel fuels and blends become more readily available, it’s important to understand the differences between them and how each impacts engine performance.

Before jumping into the different fuel options available, we’ll discuss the basics of a diesel engine and how they differ from gasoline engines. In the U.S., diesel engines are commonly used by trains, boats, barges, and heavy-duty trucks, as well as public buses and farming, construction, and military equipment.

Diesel engines are compression ignition internal combustion engines, meaning they use compression to create enough heat and pressure that the injected fuel spontaneously combusts. In most modern diesel engines, this is accomplished by using a turbocharger to compress the air going into the cylinder, directly injecting fuel just before the piston reaches its peak (top-dead-center) and relying on compression to trigger combustion.

Meanwhile, gasoline engines are spark ignition internal combustion engines that use spark plugs to ignite a compressed mixture of air and fuel in the cylinder. The order and timing of when each spark plug receives a pulse of electricity is primarily dependent on the rotation of the crankshaft, which connects the pistons of all the engine’s cylinders, and the camshaft, which controls the intake and exhaust valves. 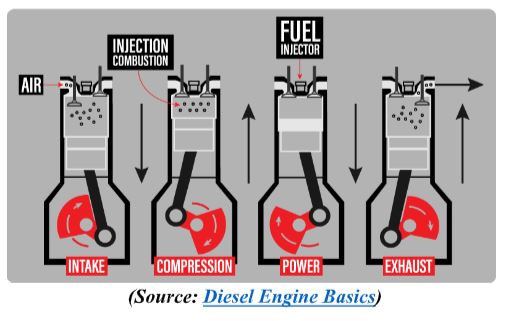 Although new low-carbon fuels and blends are continuously being created, two major groups of renewable fuels in the diesel pool have emerged: biodiesel and renewable diesel.

Biodiesel, or sometimes referred to as fatty acid methyl ester (or FAME), is typically produced by reacting vegetable oils or animal fats with methanol or ethanol in a transesterification process to create mono-alkyl esters of long-chain fatty acids. Biodiesel contains oxygen atoms, which makes it chemically distinct from regular ultra-low sulfur diesel (ULSD). Like ethanol blending limits in gasoline engines, most diesel engine manufacturers only support diesel blends up to B20, with higher blends requiring fuel system modifications.

Renewable diesel on the other hand uses the same feedstocks as biodiesel; however, it undergoes hydrotreating, thermal conversion, or biomass-to-liquid production processes. The end result is a fungible renewable fuel chemically identical to ULSD that can be used as a drop-in replacement for all current diesel engines.

The differences between ULSD, biodiesel, and renewable diesel is best illustrated in the table below, but there are a few properties worth discussion. 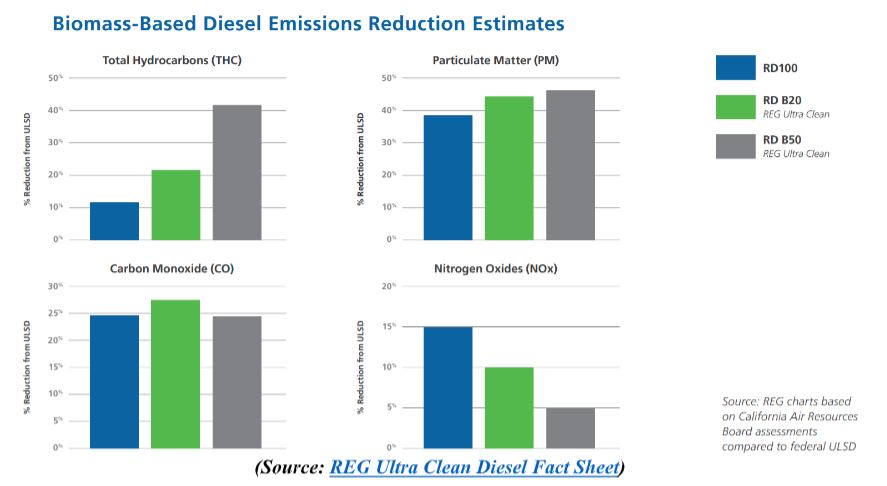 Based on this information, California’s Air Resource Board (CARB) recently announced a change within their Alternative Diesel Fuels program, which would require biodiesel blends greater than 5% to be approved by CARB. To mitigate this increase in NOx emissions, CARB has approved diesel formulations with at least 55% or 75% renewable diesel and at most 20% biodiesel.

While most of this article has focused on the chemistry and engineering behind using these three types of diesel fuel, companies are already seeing the economic benefits of switching to renewable fuels. After dismissing the biodiesel blend B99 based on the additional fuel heater cost of $15,000 per truck, Titan Freight Systems chose a renewable diesel blend of R99 to fuel its fleet. After 1 million miles, they found R99 provided the same fuel economy while reducing lifecycle emissions by 66%, saving 1,217 tons of carbon. In total, Titan Freight Systems saves about $0.021 per mile with $0.015 per mile from reduced exhaust replacement parts and downtime spent clearing diesel particulate filters (DPFs), $0.005 per mile from a 75% oil cost reduction, and the remainder resulting from reducing the amount of DPFs required.

While saving only $0.021 per mile may seem insignificant, in 2019 there were 3.91 million Class 8 trucks that drove an average of 62,571 miles. If they had been using renewable diesel, each truck would have saved an average of $1,317.77 per year, meaning that if all Class 8 trucks had used renewable diesel, it would’ve resulted in $5.15 billion dollars in annual savings. In terms of emissions reductions, if all Class 8 trucks had used R99, it would have saved more than 297 million metric tons of carbon dioxide (CO2) a year. For context, in 2018, Florida had the third-highest CO2 emissions in the country, emitting 242.5 million metric tons of CO2.

Although renewable diesel has rapidly grown in popularity because it’s a drop-in replacement of ULSD and favorable emissions reductions, some blenders have started to mix the two renewable fuels. REG has created a blend of both biodiesel and renewable diesel, coined “REG Ultra Clean Diesel”, to capture the best attributes of each. Ultra Clean Diesel can reduce emissions across the board while offering improved engine starting, lubrication, reliability, engine life, and more complete combustion.

Federal and state governments have realized the potential benefits of biodiesel and renewable diesel and are incentivizing the production of both. A federal Blenders Tax Credit (BTC) of $1.00 per gallon of biomass-based diesel produced was renewed in late 2019, and a new House bill hopes to extend the program through 2025. The RFS-2 program offers 1.5 RIN credits for every gallon of biomass-based diesel produced, which includes biodiesel and renewable diesel as defined by the U.S. Environmental Protection Agency (EPA). Renewable diesel accounts for 1.7 RINs, while biodiesel accounts for 1.5 RINs. Although RIN prices are market-based, they’ve recently made headlines after hitting all-time highs.

LCFS programs also offer credits, currently worth around $177 per credit in California, based on the total tons of carbon removed compared to a baseline carbon intensity (CI). More states like Oregon and British Columbia have followed California’s lead in enacting an LCFS, with more in development in states like Washington, New York, and Minnesota underway. 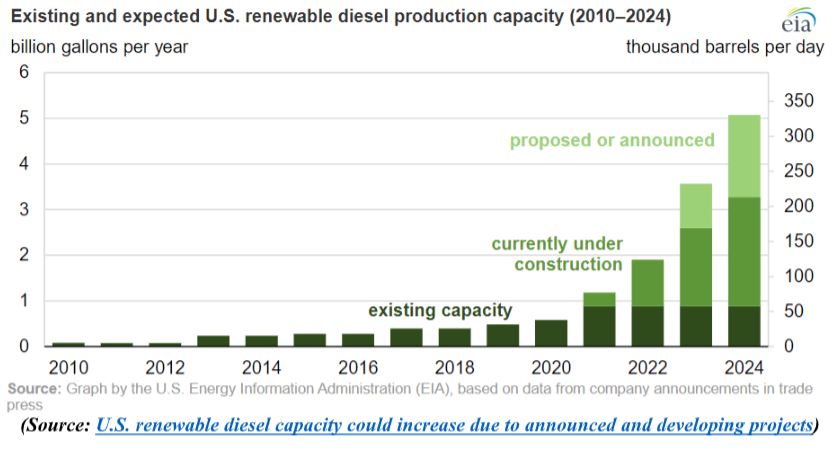 Alternative diesel fuels like renewable diesel have proven themselves to be a sustainable, renewable replacement for ULSD. The increased engine performance, emissions reductions, and growing production capacity are all steps towards a better, cleaner future. However, with any new change comes new challenges. Partnering with experienced energy consultants removes that uncertainty throughout the transition and ensures that your organization can overcome those challenges. Understanding and capitalizing on all the available incentives is the difference between operating at a loss and becoming an industry leader.
Source: Opportune LLP, By Patrick O’Brien