G20 GDP growth accelerates in the third quarter of 2021

Gross domestic product (GDP) of the G20 area grew by 1.7% between the second and the third quarter of 2021, up from a moderate quarter-on-quarter growth rate of 0.4% in the second quarter, according to provisional estimates. This is in contrast with the slowing trend recorded in the OECD area over the same period (from 1.7% in Q2 to 1.1% in Q3).

The relatively strong growth of the G20 area in the third quarter of 2021 reflects a rebound in India, where GDP rose by 12.7% in Q3, after a contraction of 11.6% in Q2, mainly driven by fixed investment and private consumption. GDP also rose markedly in Saudi Arabia (by 5.8% in Q3, from 1.1% in Q2), exceeding its pre-pandemic level for the first time, and in Turkey (by 2.7%, from 1.5%). Growth recovered more than previously estimated in Canada (by 1.3%, from minus 0.8%),1 and there was a robust contribution from some European countries including France and Italy.

However, several other G20 countries recorded a deceleration or a contraction in GDP growth. In China, quarter-on-quarter GDP growth slowed to just 0.2%, from 1.2%, and in Korea to 0.3%, from 0.8%, in the third quarter of 2021. Growth slipped into negative territory in Australia (minus 1.9%), South Africa (minus 1.5%), Japan (minus 0.9%), Indonesia (minus 0.6%) and Mexico (minus 0.4%), and it continued to contract in Brazil (minus 0.1%, after minus 0.4%). These contractions reflected mainly negative contributions from private consumption in Australia, Indonesia and South Africa, and from exports in Brazil and South Africa. 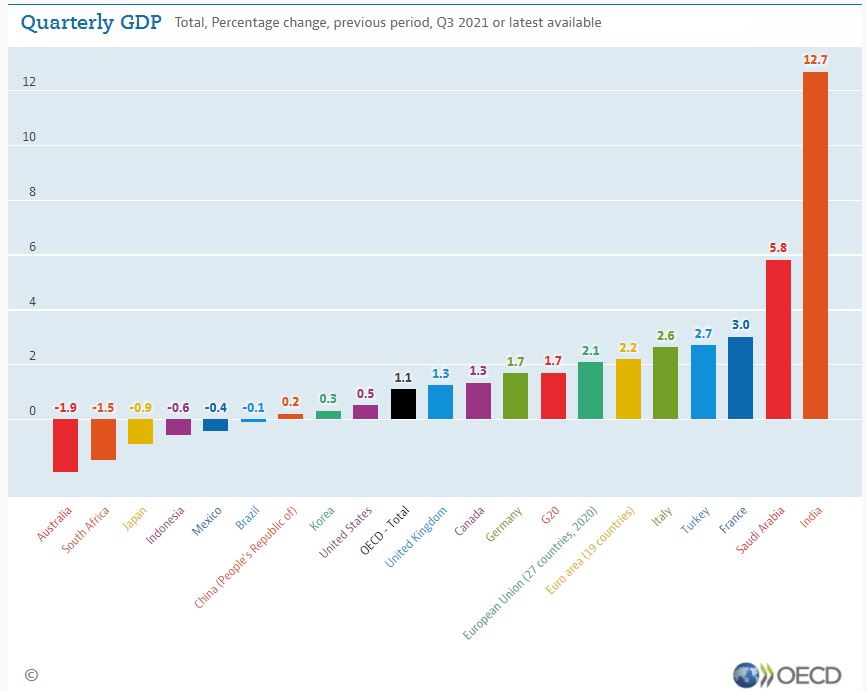 Indeed, while GDP for the G20 area as a whole exceeded its pre-pandemic level in the first quarter of 2021, half of the G20 economies, including all G7 economies except the United States, remain below pre-pandemic levels (see second chart). 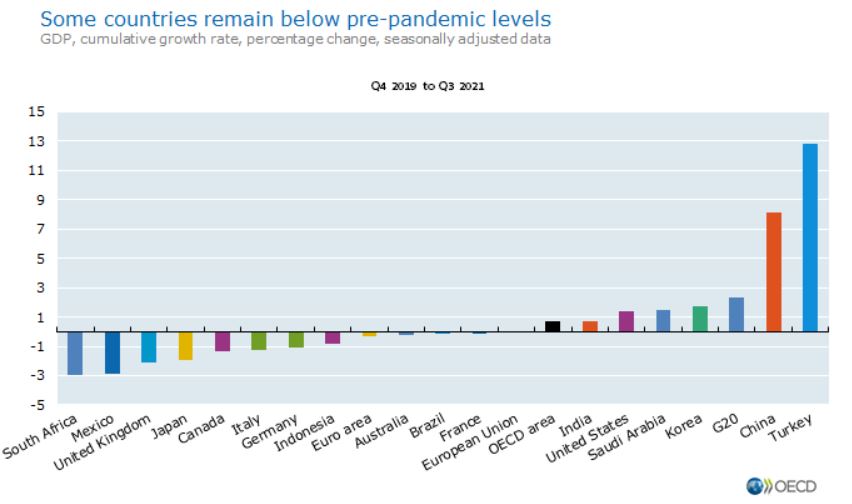